Okay, okay, Obama's not the messiah....but he sure as hell feels like it, to a country so in need of hope.:)

While at work, apparently all ....10 (?) ... Dems that work in this predominantly Catholic institution watched, lol. Even two of the priests came out to watch.

Actually, in this part of town, where North meets South at the river, it's more like 50/50.

Here is a transcript of my IM session with best work bud, Deb, whose office is at home (I am soon to follow):

Me: So...Obama looked nervous, I thought he would throw up on Michelle any minute, with the world watching.

Deb: I know. I thought it was cute that he messed up his speech. Did you realize that we were forced to listen to Yo-Yo Ma for the seven minutes we were without a leader?

Me: I know. Bubby thought it was a rap artist she'd somehow missed. The most memorable thing about this occasion was Aretha Franklin's hat..or George Bush Sr.'s hat, wtf was THAT?

Deb: Oh my, that's quite a topper.

Me: Yeah, you can do things like that when you're old. "Hey, I ruled the free world and have more money than God. Not only that, but I can't pee easily anymore, nor feel my legs. I don't give a shit, I'm wearing a ridiculous hat that looks like a small wolf landed on my head!"

Deb: Omg, that's hilarious. "Next up, The George Bush Dancers!"

Me: Bring on the dancing Georgeessssss! Nah, I saw that show already, I hated it...except when they threw the shoes. Why is Dick Cheney smiling? Why does he always have that Mona Lisa smile, like he's clearly thinking something more sinister. And what the fuck did he do, shoot himself in the foot literally this time instead of just figuratively?

Deb: He hurt himself moving out of the office!

Deb: No seriously, he did.

Me: OMG, I thought you were being sarcastic. I thought it was a gun wound again, lol.

Me: Look at Dubya, scratching his head. He and Cheney look like the organ grinder and the monkey.

Oh, and OB? Thanks for making us proud to be an American again, at least for 30 minutes.

And though I'm a liberal Dem, as I said a few posts below, we that call ourselves "liberals" need to be "open-minded" enough to concede on a few issues to the Pubes... or you're not as "open-minded and liberal" as you say you are...

It's going to take both "sides" to rebuild this thing. And the Re-Pubes are right, tho....you DID spend a bit too much, didnja, OBie?

Posted by Southernspeak4 at 3:14 PM 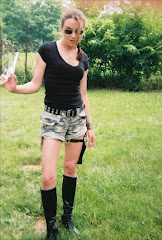